The Electric Motorcycle is Picking Up Speed

When hybrid vehicles emerged in the automobile scene, people were excited about their efficiency. However, that was coupled with a little shame, as the vehicles were not up to par with their gas-powered counterparts. People weren’t impressed by the look or the performance of their Priuses. The fully electric vehicle was equally unimpressive, but that all changed with Tesla. Now, people in the automobile industry understand that consumers want to have their cake and eat it too. That is why the electric motorcycle is picking up speed. 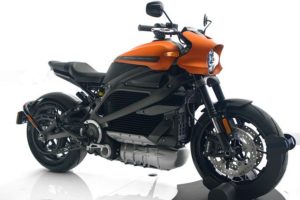 The LiveWire is Harley Davidson’s answer to the electric motorcycle industry. It is the first Harley electric motorcycle, but the company plans to continue releasing new models. At just under $30,000, this bike delivers what riders want in electric vehicles.

First of all, the bike is fast and has torque. Harley claims it can get to 60 m.p.h. In 3 seconds. It has 105 horsepower, and all this power is created with zero shifting due to the electric motor. It picks up speed with very little input from the driver. Reviewers claimed that this happened while they retained excellent control.

LiveWire is very sporty looking, and many components are designed to look like a traditional bike. For example some electrical components are housed within a unit that very closely resembles a fuel tank. The electric motor is mounted beneath the bike and is very visible, as if Harley is advertising its magnificence.

Safety is enhanced by lean-sensing traction control. Harley riders will be comfortable with the traditional Harley dash. The touchscreen interface offers multiple ride modes such as road and rain, but it can also be customized.

Then comes the mileage per battery charge and how long it takes to charge the bike. This is the downfall of all electric bikes because filling up with gas is always faster than charging. The LiveWire can travel up to 146 miles per charge. It can plug into a standard plug-in for overnight charging. For a faster charge at a charging station (Level 3 DC Fast Charge), it will take 1 hour to get a complete charge.

The Benefits of the Electric Motorcycle

Torque is important in an electric motorcycle because it has to do with how fast the bike will accelerate. It is an advantage in high-performance electric bikes because they have great “get-up-and-go” with the convenience of no shifting. These things are easy to drive!

The battery is also a consideration because it determines how much range you’ll get out of the bike. This is an advantage and a disadvantage, but it is listed as an advantage here because the lengths of rides people are getting out of electric bikes is getting greater.

Harley’s LiveWire also has a regenerative feature to its battery where the battery recharges to a certain extent while decelerating. This allows you to slow when you ease off the throttle without braking.

If everyone had to rely on normal outlets for motorcycle charging, the electric motorcycling world may fall. However, it is nice to have the option when a charging station is not available. For most bikes, a regular outlet takes 8 or more hours. For a charging station, you should be able to get mostly charged within an hour.  Like the battery, charging options are both an advantage and disadvantage.

As seen in the LiveWire, there are some pretty advanced braking systems available on motorcycles today. These are great safety features, so make sure that you are getting the best. Traction control and lean sensing are great ways to prevent a slide should you have to come to a quick stop.

The last but not the only remaining advantage to electric motorcycles is that they are environmentally-friendly. They don’t require gasoline, and since they aren’t burning fuel, they aren’t polluting the air. Not only that, but depending on where you charge your bike, it might not cost you a thing. The automobile industry is becoming increasingly electric, and eco-friendliness is a huge reason for this.

Disadvantages of the Electric Motorcycle

With all of the benefits of electric motorcycles, there are also disadvantages. Some people don’t like electric motorcycles simply for nostalgic reasons. They cling to the idea of fuel power similarly to those who refinish classic cars. This is not a bad thing, but it is a reality. For other people, the disadvantages are too great to convert to electric bikes.

In one motorcycle video review, a man admitted having to charge 3 times in one 30-mile ride because he started with very little charge on his battery. This is a huge problem, especially for people who want to go on rides over 100 miles long. Electric motorcycles are great for certain types of rides, but long trips may have hours added to them due to recharging needs. This continues to be a huge disadvantage in all electric vehicles.

Quiet bikes are dangerous because people don’t see them. You can hear a big, gas-powered cruiser from many yards away. You may not ever notice the minor whining sound of gears in an electric motor.

Lastly, you have to charge your bike, which is understood, but where? Actually, there are charging stations in nearly every city in the country. You can also have them installed in your home. This is less of a disadvantage than an adjustment, but then you do have to consider the time it takes to charge. Proper planning can alleviate much of this concern.

Will the Electric Motorcycle Take Over?

The electric motorcycle is going to be taking over any time soon, but it is definitely becoming more popular. In the next 4 years, it is expected to grow by 35% according to one report. It seems that people are expecting electric motorcycles to take over since they are performing so well. However, the drawbacks of charging times is likely to prevent a total takeover.

The great thing about the evolution of the electric motorcycle is that it isn’t offering the same lackluster early models as the Prius and other hybrid vehicles did. When Harley made an electric bike, they made a very awesome bike. This at least makes electric motorcycles a comparable option.

If you’ve been injured in a motorcycle accident, gas-powered or electric, you may be able to receive compensation for your injuries. Talk to an experienced lawyer from the Law Offices of Kirshner, Groff, and Diaz to review your case.