On May 25, 2020, police officers arrested George Floyd in Minneapolis, and during the arrest an officer killed Mr. Floyd by kneeling on his neck. Bystanders filmed the incident, and the blatant disregard for human life spurred protests around the nation. Many people have been harmed during the protests, and there are lawsuits everywhere following Black Lives Matter (BLM) protests against racism and police brutality.

The Right to Peacefully Protest 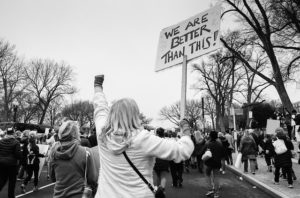 The First Amendment gives all American citizens the right to peacefully assemble.  According to the ACLU, you have the right to march without permit in traditional public spaces such as sidewalks, parks, and streets. You may need a permit for marching in the streets if you are impeding pedestrian or vehicle traffic. Private property owners may allow or forbid protests to take part on their property. Peaceful march organizers often obtain permits because the municipality can close streets for safety.

When people assemble to instigate change about severe discrimination or abuse of power, violence may occur.   There can also be opportunistic criminals and people with an alternate agenda that take part in violence. They loot and burn businesses, and people can become hurt.

In the 2020 a tiny percentage of  protesters have turned to unlawful means, burning stores and buildings. They’ve thrown molotov cocktails and other projectiles at the police. In return, police have used tear gas, batons, pepper spray, and rubber bullets to force violent protesters off the streets or into custody.

While law enforcement may have the right to do this, the collateral damage has been unacceptable. In many cases, police have harmed non-violent protesters. This is why there have been so many firings and disciplinary actions.

In rare cases, a person engaged in violent protests may have a right to a lawsuit, but in most cases they will not. The courts may throw it out because the violent protester presents with unclean hands. This means that their own wrongdoing harmed them. The liability is theirs alone.

There will likely be many lawsuits around the country claiming excessive use of force, police brutality, and negligence. One pregnant woman is suing in Portland, Oregon because she claims the police harmed and distressed her while attending a peaceful protest.

A recent report by CNN claims a Fort Lauderdale woman is considering a lawsuit because she was injured in the face and eye by a rubber bullet during a peaceful protest. Multiple Californians and a reporter in Minneapolis have also been injured by rubber bullets. If they are peacefully protesting within the confines of the law, all of these people could and should have successful lawsuits.   Never forget the First Amendment – Congress shall make no law respecting an establishment of religion, or prohibiting the free exercise thereof; or abridging the freedom of speech, or of the press; or the right of the people peaceably to assemble, and to petition the Government for a redress of grievances.

Defense to the Violence

In many cases, the police claim that people ignored orders to disperse or resisted arrest, and this warranted the use of force. The White House simply claims they did not use tear gas, although video clearly shows they used something that was tear gas-like.

A more understandable defense is that the volatile crowds and increased tensions between civilians and the police have heightened the reactivity of the police.  Sadly, there has been very little leadership to lessen the tension, so that calmer heads can prevail.  In the Lafayette Square incident, the opposite happened. Actions were taken to unnecessarily heighten the tension, causing harm to peaceful protesters.

Protest organizers face some liability for getting people together to assemble, especially if it is not done correctly.  For example, if a person is harmed during an illegal but organized protest, the courts may hold the organizer liable. This could be a protester or someone outside of the protest. An example of an illegal protest may be one that is held on private property against the wishes of the property owner.

There is nothing wrong with organizing a protest and using your protected First Amendment rights, but organizers should know how to do this legally and make every effort to make sure it stays peaceful in order to avoid liability.

Burden of Proof in Protest Cases

The biggest challenge in a protest lawsuit is proving who did what. When there are large crowds, it is difficult to know who pushed another person to the ground, or who threw a projectile.

If you feel like you have suffered injury due to violence or negligence, you should collect evidence as quickly as possible. This may be identifying eye witnesses, video surveillance, or other evidence.

In the 2016 Dakota Access Oil Pipeline protests, an explosion injured a woman. She said the police threw a concussion grenade, and that had caused injuries. The police claimed protesters had fashioned a bomb from a propane bottle. The plaintiff’s counsel can obtain evidence from the shrapnel recovered from her body and clothing. Unfortunately, the investigation has not identified the components of the shrapnel to this day.

The videos of police brutality are difficult to watch, but are some of the best forms of evidence because they are subject to less debate. If you are having a peaceful, legal protest in a public space, you are free to record or photograph the event. It is actually recommended because police and protesters can turn to violence. Video is sometimes the only thing the courts have in which to make sound decisions.

If the bystander in Minneapolis had not recorded the police officer kneeling on George Flloyd until his death, there may not have been the protests that have impacted the nation. Video is key.

Videos may seem inarguable, but they are not always foolproof forms of evidence. This may be because of camera angles or simply the power behind the individual arguing it. Some officials may see the video and still claim that the contents of the video are untrue or taken out of context. That is why it is important to obtain as many angles as possible. Witness accounts can strengthen video footage.

As many protesters have discovered, it may be impossible to completely prevent the risk of being harmed in a protest. There are outside forces that can convert the protest to a violent one without any of the peaceful protesters’ wants or consent.

If someone has injured you in the recent BLM protests, you may have a lawsuit. Make sure you get as much evidence as you can. Talk to friends and family who were with you to find out how to reach more witnesses. It can be difficult to get a verdict in your favor, so contact an attorney as soon as possible to get the process started and evidence properly collected. Some of it may have to be forcefully but legally obtained from the other party. Legal counsel will be essential to the process of discovery.

Protests can be dangerous, but the right to peaceful assembly exists in order for the public to enact positive change.

If you would like to speak to a personal injury attorney, contact Kirshner, Groff, and Diaz for a free, no-obligation regarding your potential case. You’ll speak to an actual lawyer right away.