Who Is Responsible for Your Motorcycle Getting Tipped Over

Most motorcyclists love the flexible nature of the motorbike. It can handle curves at higher speeds because it can lean into them. It can fit in small places because it only has two wheels. In some cases, it can handle more extreme terrains because of its maneuverability. All of these benefits come with an inherent risk of instability when parked. Motorcycles come equipped with stands to alleviate this risk, but it still happens. Here’s what to do if your motorcycle gets tipped over.

First, How Was Your Motorcycle Getting Tipped Over? 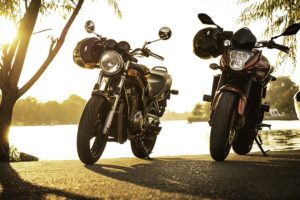 In many cases, you won’t know how your motorcycle was tipped over. It may have been that you didn’t properly park it. Maybe a vehicle ran into it. An adult or a child could have knocked it over. Some people do this on purpose, but in most cases, it is an accident.

If you see it happen, that’s a different story. If you don’t, look for a note, witnesses, or surveillance cameras. Take pictures immediately, so you’ll have evidence of the aftermath and the damages.

If it was another vehicle responsible for your motorcycle getting tipped over, you need to contact the owner. Assuming they have insurance, their automobile policy will cover the damages. Wait for an explanation before determining it was a hit-and-run. Maybe the person behind the wheel didn’t realize they hit you. Motorcycles are light, and the person may be more-than-willing to submit a claim to their insurance once they realize that there’s damage. If they aren’t, you may have to file a police report and file a personal injury lawsuit. In this case, secure any evidence you have that the other party is responsible for the damages.

A Person’s Body is Responsible 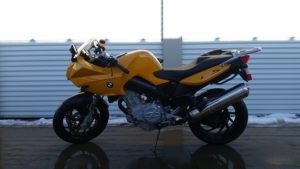 Generally speaking, motorcycles are pretty stable when they are correctly supported by their stands. However, there are many stories of both kids and adults carelessly knocking them over. As previously stated, this is sometimes done on purpose.

If you witness a person accidentally knock over your motorcycle, the first thing you should do is make sure he or she is okay. Especially if it is a child or petite adult, a heavy bike can injure him or her. After everyone is confirmed to be uninjured, then you can figure out how to handle the situation.

Automobile insurance will not play a role in your compensation for damages in this case. If the party is not agreeable to paying for the damages, you may end up being forced to file a lawsuit. A police report is recommended here as well.

Lastly, your bike may have fallen because you parked it improperly. Maybe the ground gave way or you parked it at too much of an angle. Physics is an impossible thing to fight against, and you’ll have to cover your own damages. Some insurance policies offer coverage for this.

If it is someone else’s fault that your motorcycle was tipped over, you have the potential to file a lawsuit and recover your damages. The person will be liable for your damages under the cause of negligence.

In other cases, a person could argue that the bike was parked in a place where it shouldn’t have been, such a sidewalk. Still, the courts recognize that parking a bike on the sidewalk doesn’t give people the right to knock it over. In these cases, courts typically assign a portion of the damages to each party. Florida is a comparative fault state, so you will receive compensation for the portion of the losses that don’t belong to you.

Is a Lawsuit for Your Motorcycle Getting Tipped Over Worth It?

The most important thing to consider prior to filing a lawsuit is whether or not it is worth the time and effort. It may be no matter what the cost because you what to file out of principle. However, lawsuits can take time, money, and energy. You might want to mentally set a threshold for how much money in damages warrants a lawsuit. Sometimes, a couple hundred dollar loss is not worth it. 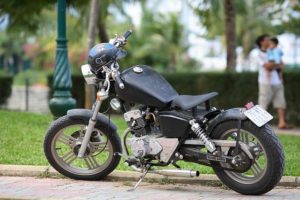 Lastly, if a person or group of people is going around tipping over bikes on purpose, the judge may award punitive damages. These are separate from physical, medical, or emotional losses. It is simply extra money meant to deter the perpetrators from engaging in that behavior again. Sometimes punitive damages make a lawsuit worthwhile, but the damages are not guaranteed, and the acts have to be clearly egregious.

Prevention from Getting Your Motorcycle Tipped Over

There are some things you can do to help prevent yourself from getting your motorcycle tipped over. These include parking in designated areas and storing your bike whenever possible. It also includes using your stands correctly.

Motorcycles typically come with one or two sets of stands including a side stand and a center stand. The side stand requires that you lean your bike onto the stand, and this creates a triangle-shaped situation that provides support for your bike. The center stand evenly lifts your bike onto a central stand that prevents it from tipping and puts the weight of the bike on the stand. Both are good supports, but many people favor one or the other.

Faulty stand use includes not paying attention to the slope of the road. Most roads have this slope in order to prevent standing water from accumulating and creating a hazard. The slopes must be considered when using a side or center stand to make sure the motorcycle is stable.

Secondly, the terrain beneath the bike must be considered. Stands can sink into asphalt or loamy Earth, and at a point, the bike will tip. Some people place a plate beneath the stand in order to stabilize the ground beneath it.

Lastly, where you park your bike matters. If it is among many pedestrians, there is a greater chance of it being knocked over. If it isn’t in a designated parking spot, this increases chances. Look for the safest place to park your motorcycle, and you’ll decrease the risk of it tipping over.

It’s Not Inevitable, But It Happens

Don’t live in fear of leaving your bike in a parked position. Most people steer clear of motorcycles, so they don’t tip them over. If you are making sure that you park correctly and in a safe place, there isn’t much more you can do. Unfortunately, accidents happen. If your bike does get tipped over, it’s not the end of the world. However, you may be able to seek damages if someone else was responsible.

If you’ve suffered a loss from your motorcycle being tipped over and would like to file a lawsuit, contact The Law Offices of Kirshner, Groff, and Diaz for a no-obligation consultation. They’ll look over your case and give you experienced advice.