Walk Your Motorized Vehicle Over Sidewalks in Florida

According to Florida State Statute 316.1995, only vehicles moved by human power are allowed on sidewalks. It is this way in most states, but there is an increasing trend in motorcycles, ATVs, and other motorized vehicles causing mayhem by users riding, basically, wherever they want. You’re supposed to walk your motorized vehicle over sidewalks in Florida, and only use them on the road if they are registered.

Why You Must Walk Your Bike 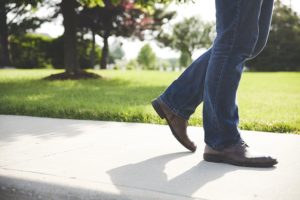 There are many reasons why the law does not allow motorized vehicles on sidewalks. The primary reason is safety. These paths were meant for the safe course of travel for slower, non-motorized traffic. If you combine these pedestrians with motorized vehicles, the sidewalks are no longer safe.

Another reason motorized vehicles cannot be on sidewalks is for the safety of the operator. Read the news, and you’ll see evidence of this danger. In March 2019, a minivan driver hit a dirt bike that was travelling on the sidewalk in Escambia County. Passenger vehicles are expected to look out for people travelling on the sidewalk, but they weren’t expecting a fast-moving motorized dirt bike. The driver probably never saw it.

What About Motorized Wheelchairs?

Motorized wheelchairs are an obvious exception to the human-powered-only rule for sidewalks. In fact, Florida State Statute 316.1303 allows them to temporarily use the road when necessary. An example of this would be if something was blocking the sidewalk. The rules are fairly logical. The problem occurs when people knowingly break the rules.

Over the years, there have been many stories about “dirt bike culture.” The term has various meanings and connotations depending on individual experiences.

In Cincinnati, Ohio, residents called groups of riders a menace to the town. This is because they ride through parks and on sidewalks. They also do this at any hour of the day or night. There are noise complaints, and people claim the riders damage property.

In New Haven, Connecticut, similar groups of riders have caused mayhem around the town. The town has imposed fines on these riders. The local government has gone so far as to prohibit gas stations from selling fuel to riders who illegally pull into the station.

These sorts of incidents give “dirt bike culture” a bad connotation. However, there is another side to dirt bike riding that has a positive cultural element.

The positive part of dirt bike culture is that there are some truly talented riders out there that make riding into an art.

The Art of of the Motorcycle (and Other ATVs)

Both motorcycle and other ATV riders have often perfected moves like the wheelie and other dangerous tricks, but they aren’t perceived as having a special talent. Anyone who has tried one of these moves understands that it takes practice and skill. The positive connotations of dirt bike culture are that these riders have the drive and motivation that many other people have for more socially-acceptable hobbies. They simply lack a proper place to perform.

What Does Dirt Bike Culture Have to Do with Rules for Sidewalks?

The connection between dirt bikes and rules for sidewalks is one of responsibility. Dirt bike and ATV riders have a responsibility to understand rules and regulations in order to keep themselves and others safe from what some may call mayhem. This means locating recreational parks that are designed for dirt bike or ATV riding. It means not riding unregistered vehicles on the road, and it means walking your motorcycle on sidewalks.

Riding is Associated with Freedom 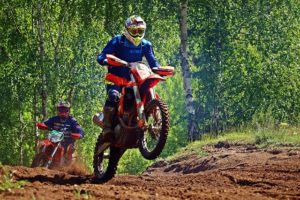 The people riding around towns with no respect for the rules and regulations of the roads and sidewalks are abusing the freedom that riding brings.

Freedom only comes from respecting the rules set up in order to keep people safe from unnecessary harm. If people don’t respect the rules, the freedom associated with riding will be taken away.

This freedom applies to all motorcycles, even those that are permitted on roadways. When people repeatedly get harmed from the mistakes or apathetic carelessness of dangerous riders, more rules are created. The intent of these rules is to keep people safe, but it really limits what riders are allowed to do.

Breaking the Rules is a Slippery Slope

Many sports have had checkered pasts with preconceived negative connotations. However, these sports have gained respect by persistence and an adherence to the rules. Skateboarding and snowboarding are great examples of sports that once seemed to be mindless pastimes but now garner great respect. If dirt bike culture continues to be one people associate with rule breaking and property damage, it isn’t likely to follow the likes of other sports.

On the other hand, if dirt bike riders do their part to prevent dangerous events caused by their riding, there would be benefits. One of these benefits could be that more ATV parks are created and opportunities for would-be riders. Breaking the rules puts any hopes of increased accessibility for riders on the back burner.

What Happens if You Don’t Walk Your Motorized Vehicle Over Sidewalks in Florida?

If you must ride your motorized vehicle over a sidewalk in Florida, look forward to receiving a traffic violation ticket. This is a best-case scenario (aside from not getting caught). In some cases, as the news indicates, people can get hurt or killed. Intriguingly, this risk applies to riders too, not just pedestrians.

Hurt While Riding or Walking Your Motorized Vehicle Over Sidewalks? 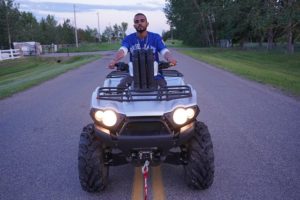 If you are injured while riding or walking your motorized vehicle over a sidewalk, collect as much evidence as possible. Maybe there are witnesses or any photos, so try to get them ASAP so they don’t get lost.

When you’re walking your motorized vehicle, you won’t be chastised because you are following the rules. Even if you were riding illegally, you may not be totally at fault. Breaking the rules does not give other parties carte blanche to harm you.

Florida is a comparative fault state, which means you can sue for damages in the event of an accident, even if you are partially at fault. The amount awarded to you will be decreased by the percentage that you were at fault.

Use the example of a $10,000 medical bill after an accident. You were riding your motorized vehicle on the sidewalk, and the courts decided that made you 30% at fault. They would award you $7,000. The remaining $3,000 would be on you.

Likewise, if a motorcycle rider harms you on a sidewalk, the courts will likely hold liable whoever hit your for the damages.

In either case, the best thing to do if you are harmed on a sidewalk is to talk to a lawyer even if you feel you are at-fault. It is possible for an experienced lawyer to determine whether or not you have a case worth filing. Make sure you feel comfortable with the attorney who represents you, as the legal process takes time and energy. Not only will an experienced lawyer lessen the time it takes, but he or she will also make the experience better.

If you’d like to speak to an experienced personal injury lawyer, contact the Law Offices of Kirshner, Groff, and Diaz for a no-obligation consultation.