No Lawsuits for Illnesses Related to Donated Food

Throughout the country, people are waiting in their vehicles in lines to get food from food banks. The lines stretch for miles, but people are hungry. Food shortages combined with unemployment have increased the pressure on food banks to provide food for more and more people. The COVID-19/ corona virus pandemic has created an unprecedented need for food donations. This creates a potential increase in the risk of food poisoning as food banks seek food from wherever they can get it. For this reason, justifiably the law protects food banks from liability from food-borne illnesses related to donated food in most circumstances.

In 1996, the congress passed the Bill Emerson Good Samaritan Food Donation Act. The lawmakers intended to promote food donations by limiting the liability donors faced once the food was out of their hands. 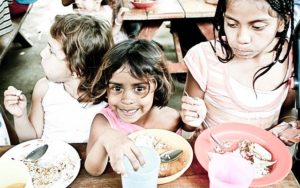 The purpose behind the law is as relevant now as it was then according to statistics. A 2010 statistic from the U.S. Department of Agriculture (USDA) stated that Americans waste 133 billion pounds of food annually. The Environmental Protection Agency (EPA) estimated that in 2014, Americans put 29.38 tons of food into landfills. Disruption in food supply chains caused by the pandemic have forced more food waste from the agriculture sector, as farmers are unable to get their products to the consumer.

The Bill Emerson Good Samaritan Food Donation Act limits liability for those who distribute food. The exceptions to this are that the food must be distributed in good faith, without gross negligence, and without intentional misconduct. In this way, the act protects the consumer and the donor. It also protects gleaners, or those people who procure donations.

Despite the protections the Good Samaritan Food Donation provides, farmers and retailers are reluctant to donate food due to liability concerns. These concerns stem from the ambiguity of the law and fear over local regulatory regulation.

The terms used in the Act are very subjective. For example, “good faith” that the food is wholesome is difficult when it comes to expiration dates that may be arbitrary and food labeling that may fall short of acceptable. Liability immunity protects the donor from action from the consumer. It’s not clear if it protects the donor from action from the gleaner. Lastly, it is unclear if state law could create a liability issue over the federal law.  Though we believe this to be unlikely in Florida.

Florida State Statute 768.136 is about liability related to donated food that is canned or perishable. It basically mimics the Good Samaritan Food Donation Act with its own definitions of what a donor and gleaner are. It does not specify what good faith is, but it does allow liability for intentional, reckless, or negligent acts.   Which is a very high bar to cross.

When Can You Sue for Illnesses Related to Donated Food?

Examples of intentional, reckless, and negligent acts that place liability on donors do exist, but they are difficult to find.

In November 2019, some people who ate at a homeless center in New York State became violently ill from eating expired chicken salad. They had to go to the hospital and claim to have found a falsified expiration sticker. Someone placed it over the original sticker, but with a date 1 month past the original expiration date. The sickened people are suing the shelter for $2 million a piece. It is unclear whether or not they will be successful, or if the case will be thrown out.

How to Sue for Damages Caused by Donated Food 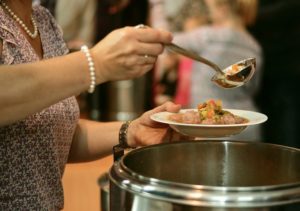 In order to sue for damages caused by donated food, you are going to need proof the provider of the food acted in a reckless, malicious, or negligent manner. A reckless manner could be food preparation and storage errors. Storing dairy products at room temperature or preparing salads on unwashed surfaces could be reckless. However, this is difficult to prove.

Florida has comparative negligence laws, so if a person ate obviously spoiled food, they would have some level of liability for their decision.

Basically, if you are going to sue for damages from donated food, you are going to have to prove some serious negligence or intentional act. Poisoning food is a possible malicious act, and definitely falsifying expiration dates would make a person liable. The reason for the lack of lawsuits is likely due to the general philanthropic nature of food banks. The people who serve in these locations are typically well-intentioned and serving the public, which is why they should be protected.

Better to Protect Yourself from Donated Food

There is inherent risk in any food purchase because you are relying on food safety standards that you have not witnessed. This risk could be elevated in donated food because it may not have gone through the same standards.

This doesn’t mean that you shouldn’t accept or seek out donations. In 2015, approximately 12 percent of households were food insecure. Given the situation our country is facing with the COVID 19/ corona virus pandemic, many people are left with no choice but to seek out donations.  Donations can mean the difference between health and hunger. Instead, it means that you should evaluate your donated food for safety.

Check expiration dates. Wash vegetables yourself. Smell food and take a small bite to test food and see if it is spoiled. Don’t assume that your food is safe to eat, but it probably is. If it isn’t, throw it out. If you get sick from eating bad donated food, you aren’t likely to have a lawsuit.

While it may seem discouraging that consumers aren’t as protected over illnesses related to unsafe donated food as they are when they purchase food, the benefits outweigh the disadvantages.

Since people put so much food in landfills, it is responsible for 18 percent of methane emissions that come from landfills. These emissions harm the environment. Farmers have tried to find ways to re-purpose unused crops, but composting produces 10 times the emissions of donating food. It might seem surprising, but eating food is better for the earth than composting the food. This is not meant to discredit the benefits of composting over alternative disposal methods.

In 2010, it was estimated that only 5 percent of food waste was donated. This lack of donation is somewhat due to liability concerns. This is why the courts protect food providers who donate food from lawsuits, so more farmers and retailers will donate their unused supply.

Filing a Lawsuit Over Illness Related to Donated Food

If you believe you have been maliciously poisoned by donated food, you should file a lawsuit following whatever criminal charges are filed. A civil suit is definitely warranted if food is being maliciously handled carelessly and causing people to become ill. The most important thing you need for a lawsuit is some evidence. In a civil case, you must prove that negligence or malicious action was more likely than not, based on the evidence.

If you would like to speak directly to a lawyer about filing a personal injury case, contact the law offices of  Kirshner, Groff, and Diaz for a no-obligation consultation.